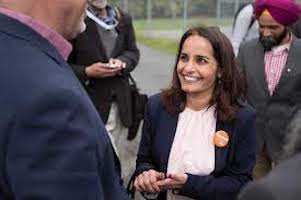 Racism is a huge problem in our society and government systems. We have a system that holds a few people to privilege. In many cases that privilege is base on appearance and skin colour. Rachna Singh would seem to be working hard to curb this problem and give us social equality. The question is are the efforts only bandaid and a dress-up show to give us hope that the system will change or our the system just going to stay the same while all we give is talk of change.

Rachna Singh, Parliamentary Secretary for Anti-Racism Initiatives, has released the following statement on the Day of Action Against Anti-Asian Racism:

“On the Day of Action Against Anti-Asian Racism, and as the parliamentary secretary for anti-racism initiatives, I want to directly challenge all British Columbians to take action to combat discrimination.

“During this pandemic, we have seen people of Asian descent targeted and scapegoated, leading to increased attacks against them. But today is not just about speaking out against racist incidents.

“Today is about taking concrete action to disrupt systemic racism. It’s about asking ourselves, ‘What are we going to do about it?’

“Everyone has a role to play in building a more inclusive province. It starts with us. It is not enough to be ‘not racist,’ we must be anti-racist. Living in a society steeped in colonialism and systemic racism impacts us all. We each carry prejudices and we must confront them.

“Our government recently launched an anti-racism information campaign to encourage British Columbians to do their part. Anti-racism requires something from all of us. It can be a lot of things, but it can’t be nothing. We must also speak up. When friends, family or co-workers make an inappropriate comment, even in private, don’t let it slide. Listen, probe and let them know their words matter.

“To continue to push to combat racism, we will also be proclaiming May 23-29, 2021, as Anti-Racism Awareness Week. We know proclamations alone are not enough and we must back it up with meaningful action. That’s why our government recently increased funding for community groups to respond to racism at a local level. We will be launching a racist incident hotline and we’ll be bringing in legislation to pave the way for race-based data collection and B.C.’s first anti-racism act. But we know there’s much, much more to do.

“I also want to thank Stand With Asians Coalition, which started as a group of grassroots activists in Burnaby, for its incredible organization to turn the Day of Action Against Anti-Asian Racism into a national movement, endorsed by municipalities across the country. Your strength is inspiring.”