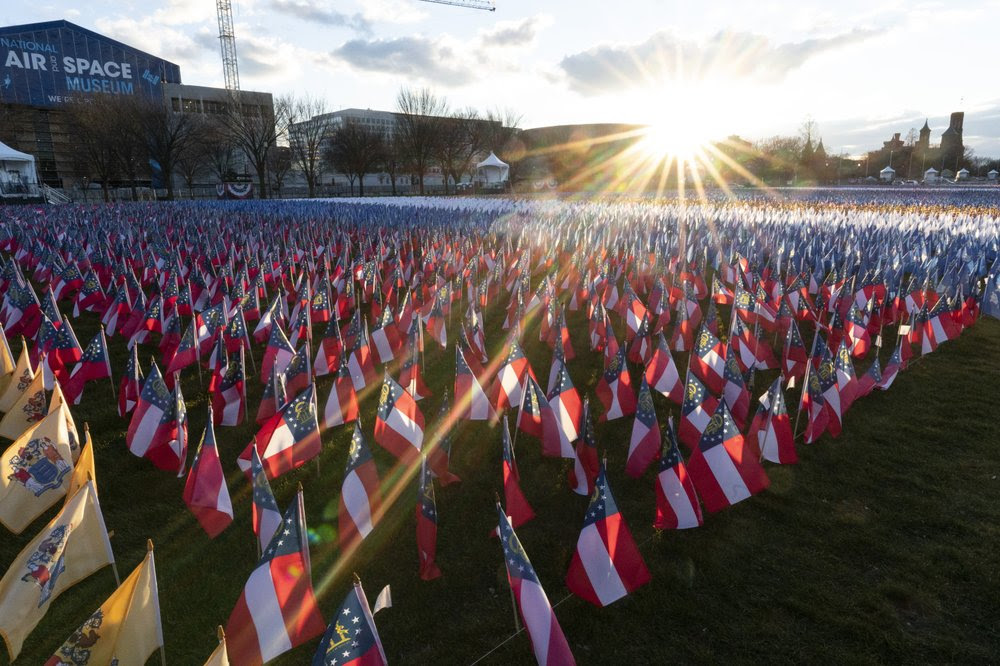 Joe Biden will become the 46th president of the United States on Wednesday, seeking to move past the toxicity and bitterness that has engulfed the nation as the divisive Donald Trump’s tenure in the White House comes to a grinding halt.

There will be 180 degree reversals, immediate ones, from Day One of his presidency in both policies and tone.

The president-elect plans to unveil a sweeping immigration bill as soon as his administration takes over.  It would provide an eight-year path to citizenship for an estimated 11 million people living in the U.S. without legal status, Lisa Mascaro and Bill Barrow report.

The legislation puts Biden on track to deliver on a major campaign promise after four years of Trump’s restrictive policies. But it does not include beefed-up border security, which makes its passage in Congress more difficult.

Great Expectations: Biden has evoked Franklin Delano Roosevelt in promising a remaking of America unseen since the New Deal. Pledging to emulate some of the loftiest reforms in the nation’s history has left him with towering promises to keep. And he hopes to deliver that despite the pandemic and searing national divisions. Can Biden’s great expectations be met? Democrats only have razor-thin control of the House and Senate. But he brushes off the doubters. What’s certain is that the effort will be intense. Dozens of consequential executive actions as well as major pieces of legislation are coming in a deluge that starts on Inauguration Day, Will Weissert reports.

The To-Do List: Biden’s hefty list starts with a flurry of orders. Climate change, immigration, health care and more will be competing for attention — and dollars.

National Security: Biden’s national security Cabinet may be bare on Day One of his presidency. His nominees to head the State Department, the Pentagon, the Department of Homeland Security and the intelligence community are facing a series of confirmation hearings. None is likely to be confirmed by the time Biden takes the oath of office Wednesday.

Black Americans: The resiliency, culture and heroism of Black Americans and the African Diaspora will be the central theme of a virtual event this evening that will celebrate the nation’s diversity ahead of the inauguration. Kamala Harris will offer remarks at the event, “We Are One,” which will also honor the historic nature of her being the first Black and South Asian woman to become vice president of the U.S.  Several of the nation’s top Black leaders will also deliver remarks, Kat Stafford reports. 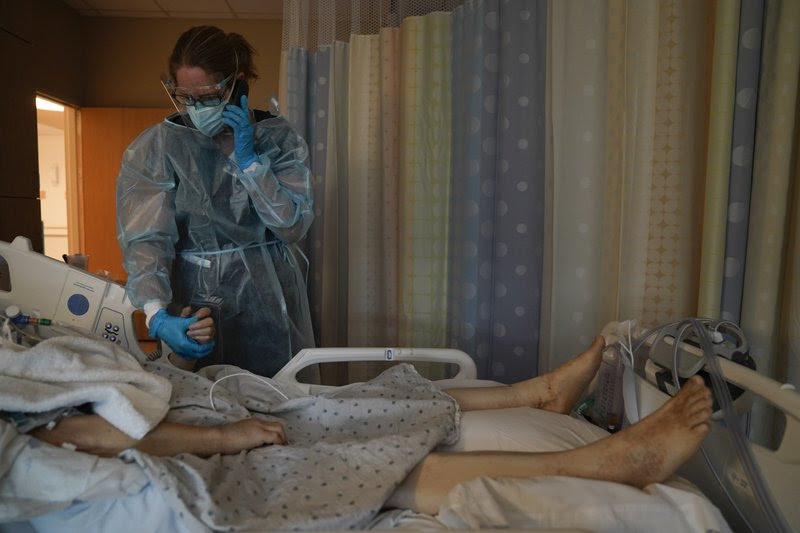 US virus death toll to pass 400,000 as fatalities rise in 30 states amid winter surge; Exhausted hospital chaplains bring solace to the lonely and dying

Coronavirus deaths are rising in 30 American states as a harsh winter surge pushes the overall toll toward 400,000 amid warnings that a new, highly contagious variant is taking hold.

A vast effort is underway to get Americans vaccinated, but the campaign is off to an uneven start. According to the latest federal data, about 31 million doses of vaccine have been distributed, but fewer than 11 million people have received at least one dose. David Crary reports.

The U.S. will likely surpass 400,000 deaths later today, a terrible toll under the watch of the Trump administration. Further coverage to mark this bleak milestone can be found here in the coming hours.

California has become the first state to record more than 3 million infections. It wasn’t entirely unexpected in a state with 40 million residents but its speed was stunning.

Hospital Chaplains: Like doctors, nurses and other medical-care providers, hospital chaplains have become first responders for people with COVID-19. As families are barred from visiting loved ones to curb the disease’s spread, chaplains often are there as surrogates, holding the hands of the dying, praying with them and carrying iPads into hospital rooms to provide real-time connections for grieving families. It’s emotionally draining, even dangerous work, say chaplains at one hospital in Los Angeles. But it’s also something they feel called on to do, John Rogers reports.

Virus Variants: Mutations to the virus are rapidly cropping up and health officials say the pandemic could get worse unless people do more to curb cases. Each new infection gives the virus a chance to mutate. So far, vaccines seem to remain effective against the new variants, but the longer it takes to vaccinate, the more likely a version of the virus that can elude defenses could emerge. In the U.S., health officials say a new variant first identified in the U.K. may become dominant in the U.S. by March and cause more hospitalizations and deaths because it spreads more easily, Marilynn Marchione reports.

Hard-Hit Yuma: Exhausted nurses in rural Yuma, Arizona, are regularly sending COVID-19 patients on a long helicopter ride to hospitals in Phoenix when they don’t have enough staff. The winter lettuce capital of the U.S. also has lagged on virus testing in heavily Hispanic neighborhoods and just ran out of vaccines. But some support is coming from military nurses and free tests for farmworkers and the elderly in Yuma County, the hardest-hit county in one of the hardest-hit states, Anita Snow reports. 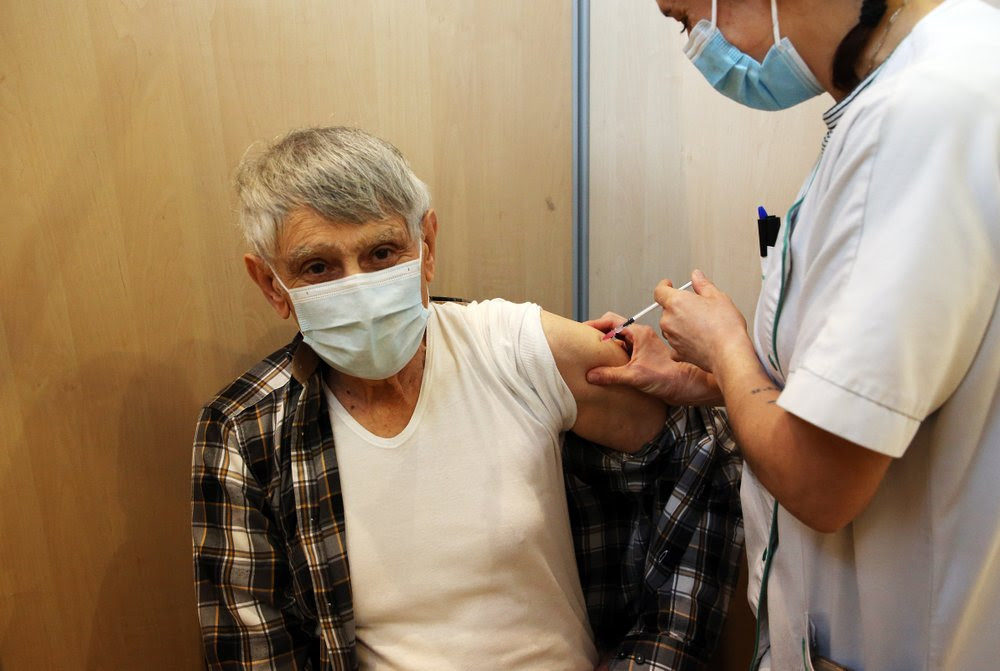 The World Health Organization chief has lamented vaccine inequality between the rich and poorer nations.

Director-General Tedros Adhanom Ghebreyesus kicked off the WHO’s week-long executive board meeting with the stark comparison: 25 vaccine doses for a country thought to be Guinea in Africa while more than 39 million doses have been given in nearly 50 richer nations, Jamey keaten reports.

He said it’s “not right” that younger, healthier adults in wealthier countries get vaccinated before older people in poorer countries. The WHO chief also raised the issue of the “profits” that drugmakers can make targeting their vaccines to richer countries.

China Outbreaks: The country is battling with virus outbreaks across its frigid northeast, prompting additional lockdowns and travel bans ahead of next month’s Lunar New Year holiday. The country reported another 118 cases, with 43 of those in the province of Jilin. Hebei province just outside Beijing saw another 35 cases, while Heilongjiang province bordering Russia reported 27 new cases. Beijing reported just one new case, though some communities and outlying villages there have been placed under lockdown.

Dubai Surge: Since becoming one of the world’s first destinations to open up for tourism, Dubai has promoted itself as the ideal pandemic vacation spot. But infections are surging to unprecedented heights in the United Arab Emirates. The daily virus case count has nearly tripled in the last month. Dubai is known for its cavernous malls, frenetic construction and legions of foreign workers. The city was built on the promise of globalization; its economy draws from the aviation, hospitality and retail sectors — all hard hit by the virus. Authorities are seizing on the country’s mass vaccine rollout as the only way to contain the outbreak, Isabel DeBre reports from Dubai.

Spain’s Pandemic Hospital: As a surge of infections is once again putting Spain’s public health system against the ropes, an emergency hospital seen by many as an extravagant vanity enterprise is getting a fresh opportunity to prove its usefulness. The Nurse Isabel Zendal Hospital was built in 100 days at a cost of 130 million euros ($157 million), more than twice the original budget. Yet as cases spiked again after Christmas and New Year’s, the Zendal has been getting busy, Aritz Parra reports from Madrid.

South Africa’s Trailblazer: The country’s pioneer Black food writer Dora Sitole, who quietly defied apartheid to win respect and a readership for African cuisine, died this month aged 65 of COVID-19. Hired by a canned foods company in 1980 to promote their products by giving cooking lessons in Black townships, Sitole went on to train as a Cordon Bleu chef, become food editor of a leading magazine, the author of several bestselling cookbooks and a television personality, Mogomotsi Magome reports from Johannesburg. 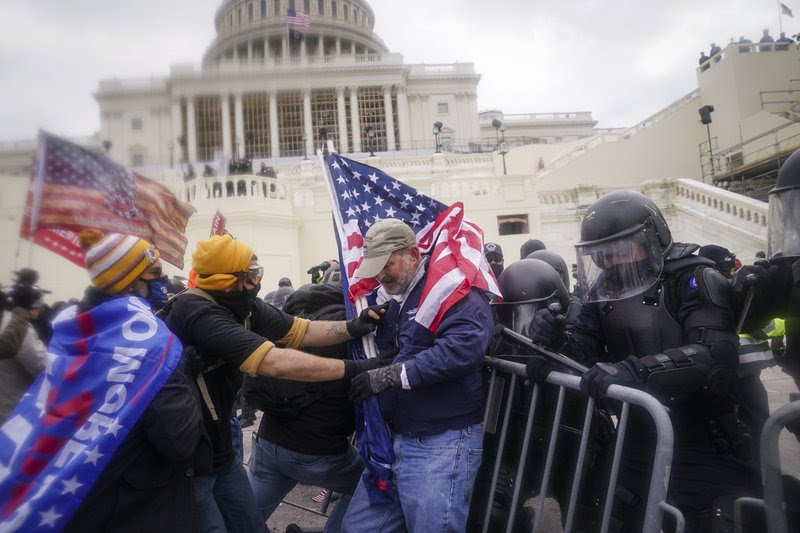 “We were on our own,” one of the officers told the AP. “Totally on our own.”

Interviews with members of the U.S. Capitol Police who were overrun by pro-Trump rioters on Jan. 6 show just how quickly the command structure collapsed as a throng of people, egged on by Donald Trump, set upon the Capitol.

The officers who spoke to the AP said they were given next to no warnings by leadership on the morning of the insurrection about what would become a growing force of thousands of rioters, many better armed than the officers themselves, Nomaan Merchant and Colleen Long report.

And once the riot began, they were given no instructions by the department’s top leaders on how to stop the rampaging throngs or rescue lawmakers who had barricaded themselves inside.

The Capitol Police has more than 2,300 staff and a budget that’s grown rapidly over the last two decades to roughly $500 million, making it larger than many major metro police departments. Despite plenty of online warnings of a possible insurrection, ample resources and time to prepare, the Capitol Police planned only for a free speech demonstration on Jan. 6.

They rejected offers of support from the Pentagon three days before the siege, according to senior defense officials and two people familiar with the matter. And during the riot, they turned down an offer by the Justice Department to have FBI agents come in as reinforcements.