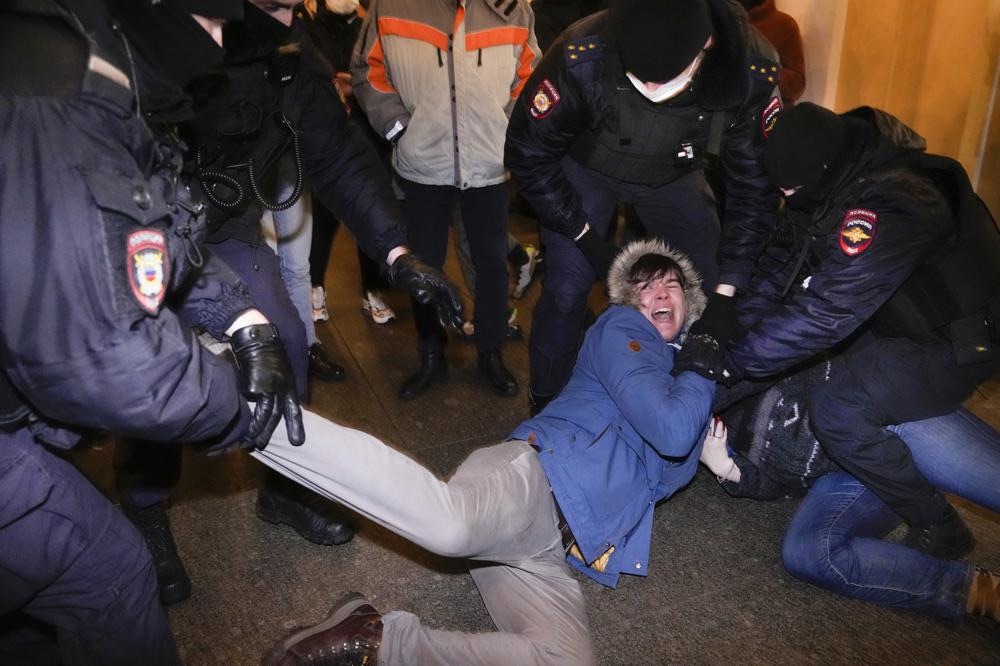 Ever since Russia invaded Ukraine, Anastasia has started her day by composing an anti-war message and posting it on the wall at the entrance of her apartment block in the industrial city of Perm in the Ural Mountains.

“Do not believe the propaganda you see on the TV, read independent media!” reads one. “Violence and death have been constantly with us for three months now — take care of yourselves” reads another.

The 31-year-old teacher, who asked to be identified only by her first name because she fears for her security, said she wanted “a safe and simple method of getting a message across.”

“I couldn’t do something huge and public,” she told The Associated Press in a telephone interview. “I want to get people to think. And I think we should influence whatever space, in whatever way we can.”

Despite a massive government crackdown on such acts of protest, some Russians have persisted in speaking out against the invasion — even in the simplest of ways.

Some have paid a heavy price. In the early, wintry days of the invasion in February, authorities moved quickly to quash demonstrations, arresting people who marched or even held blank signs or other oblique references to the conflict. Critical media outlets were shut down as the government sought to control the narrative. Political opponents were singled out by President Vladimir Putin or commentators on state-run TV.

Lawmakers rubber-stamped measures that outlawed the spread of “false information” about what the Kremlin called a “special military operation” and disparaging the military, using them against anyone who spoke out against the attack or talked about the atrocities Russian troops were alleged to have committed.

As the war has dragged on into the languid days of a Russian summer, some like Anastasia feel guilty that they cannot do more to oppose the invasion, even within the constraints of the new laws.

When Russian troops rolled in Ukraine on Feb. 24, Anastasia said her first thought was to sell all her possessions and move abroad, but she soon changed her mind.

“It’s my country, why should I leave?” she told AP. “I understood I needed to stay and create something to help from here.”

Sergei Besov, a Moscow-based printer and artist, also felt he couldn’t stay silent. Even before the invasion, the 45-year-old was making posters reflecting on the political scene and plastering them around the capital.

During the 2020 unrest in Belarus over a disputed presidential election and the ensuing crackdown on the protesters, he made posters saying “Freedom” in Belarusian.

After the invasion of Ukraine, his project, Partisan Press, started making posters saying “No to war” – the main anti-war slogan. Video of the poster being printed became popular on Instagram, and demand for copies was so great that they were given away for free.

After some of his posters were used at a demonstration in Red Square and some people displaying them were arrested, it became clear that the police “would inevitably come to us,” Besov said.

They showed up when Besov wasn’t there, charging two of his employees with participating in an unauthorized rally by printing the poster used in it.

The case has dragged on for over three months, he said, causing all of them lots of stress over whether they will be penalized and to what extent.

Besov has stopped printing the “No to war” posters and went for subtler messages such as “Fear is not an excuse to do nothing.”

He considers it important to keep speaking out.

“The problem is we don’t know where the lines are drawn,” Besov said. “It is known that they can prosecute you for certain things, but some manage to fly under the radar. Where is this line? It is very bad and really difficult.”

Sasha Skochilenko, a 31-year-old artist and musician in St. Petersburg, failed to stay under the radar and is facing severe consequences for what she thought was a relatively safe way to spread the word about the horrors of war: She was detained for replacing five price tags in a supermarket with tiny ones containing anti-war slogans.