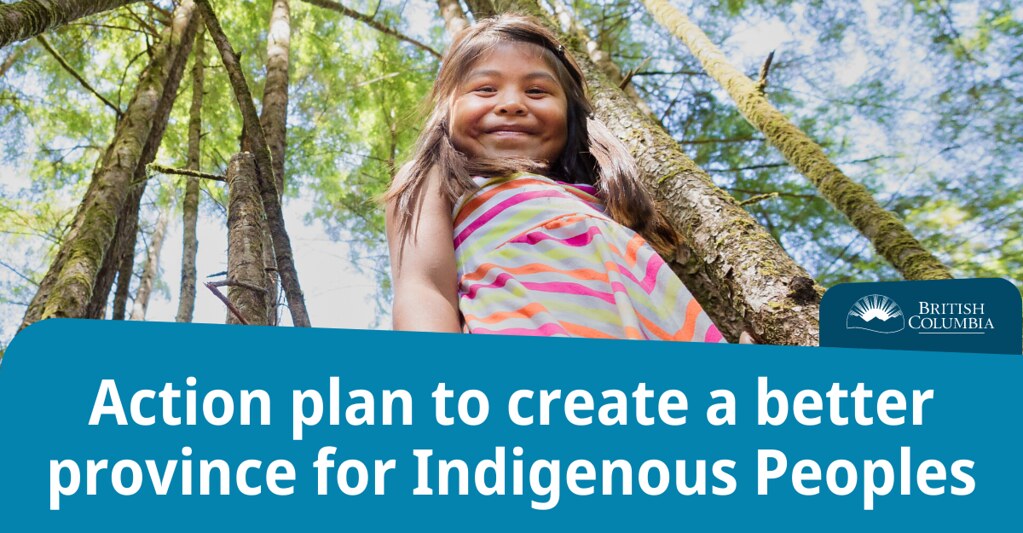 The Province is releasing the Declaration Act Action Plan, developed in consultation and co-operation with Indigenous Peoples, outlining 89 specific actions every ministry in government will take to create a better province for Indigenous Peoples in B.C.

“This plan is a first for any government in the world. It will drive transformative change in the relationship with Indigenous Peoples and help us build a brighter future for everyone,” said Premier John Horgan. “By working together in partnership, we are creating more opportunities, better jobs and stronger environment protections. This is a roadmap that builds on the progress we have made – a new way forward and another important step towards meaningful reconciliation.”

“Two years ago, the seeds of change were sown – a future rife with the promises of true transformation and reconciliation became possible with the historic passage of the Declaration Act,” said Grand Chief Stewart Phillip, president, Union of British Columbia Indian Chiefs. “Make no mistake, there have been and there will continue to be numerous obstacles that challenge the work being done to revolutionize and rebuild a relationship that has long been mired in colonial violence and discrimination. Today is not only a day of celebration but a day of reflection and accountability. We must reflect on the processes, frameworks and institutions that continue to deny the Title and Rights of First Nations, enact tremendous harm upon our communities and perpetuate a colonial cycle of marginalization and violence. We must hold our governments and those in positions of power accountable for their actions and their commitments to the Declaration Act. With hope in our hearts we celebrate, reflect and continue the fight for change.”

Regional Chief Terry Teegee, BC Assembly of First Nations, said: “The launch of the Declaration Act Action Plan is a significant step toward the implementation of the UN Declaration. The relationships that have been built, and the commitments set out in the action plan, provide a concrete pathway for transformational change, and the accountability mechanisms set out through annual reporting and reviews of the action plan will help ensure we stay on track. The good faith efforts made by everyone who contributed to this body of work are worth recognizing and celebrating. The work to come will not be easy, but I am hopeful we can build upon our success and lessons learned to ensure that First Nations are full partners in this work, and that First Nations inherent rights are meaningfully upheld in alignment with the visions set out within their own laws and supported by international laws including the UN Declaration.”

Cheryl Casimer, First Nations Summit political executive, said: “The passage of the Declaration Act just over two years ago was an historic step forward for the Government of B.C. in righting its relationship with First Nations – taking a concrete step to move away from a tradition of rights denial toward a modernized relationship based on human rights, co-operation and partnership. While it is not perfect, the long-awaited DRIPA Action Plan focuses on pragmatic and systemic changes needed so that our communities are supported in their resilience, rights and self-determination and will assist in meeting the objectives of the UN Declaration to uphold the minimum standards for the survival, dignity and well-being of First Nations citizens. This is another important step on our collective paths towards reconciliation.”

Chief Charlie Cootes, Uchucklesaht Tribe, on behalf of the Alliance of BC Modern Treaty Nations, said: “The action plan to implement the UN Declaration is a significant step in achieving lasting reconciliation between the Province of British Columbia and Indigenous Peoples. Modern Treaty Nations have a unique and distinct relationship with the Province and we are pleased to see the action plan reflects this and speaks to our Shared Priorities Framework. We look forward to advancing the meaningful work of implementing the action plan collaboratively with our treaty partners.”

The Declaration Act Action Plan will be comprehensively updated with Indigenous partners within five years.

“This action plan, built in consultation and co-operation with Indigenous Peoples, contains four themes, all built from the UN Declaration on the Rights of Indigenous Peoples. The outcomes articulate what the province will look like should we be successful in reaching our goals and describe the province we need, we deserve and we are committed to realizing. The 89 actions are tangible steps each ministry will take to realize this future. We must make the province a place where the human rights of Indigenous Peoples are respected, celebrated and finally implemented in every aspect of society. The work ahead of us won’t be easy – but together, we can change the trajectory of history and address the harms done by over 150 years of colonialism.”

“The action plan presented today confirms the shared priority and commitment of the First Nations and the Government of British Columbia to implement the BC First Nations Justice Strategy. Addressing the over-incarceration crisis of First Nations people in B.C. will require urgent and collective work to change the criminal justice system and create new Indigenous justice systems. This work will require significant investment, re-allocation of existing resources and a robust accountability framework.”

“Meeting the objectives of the UN Declaration is fundamental to the future of British Columbia. It is the pathway to ensuring the basic human rights of Indigenous Peoples are upheld and building a shared future that is resilient and cohesive. The Declaration Act Action Plan is one important step toward that future. While the work ahead is tremendous, we are ready to do our part to see these actions fully implemented in our territory and across the province.”

“Lake Babine Nation appreciated the opportunity to help shape the action plan, and now we look forward to working with the Province to implement it. This will be hard and challenging work for all of us, but I believe that with continued commitment, dialogue and collaboration, we can use this action plan to improve the road for our future generation from here on forward. There is no greater imperative in front of us than the one to create respect and recognition between us, and ensure that current and future generations of our peoples live in dignity and unity. The Lake Babine Nation Foundation Agreement, signed in 2020, and B.C.’s action plan, will serve as powerful and shared roadmaps to that of a stronger future for both Lake Babine Nation and British Columbia.”

“The Tahltan Nation has appreciated the opportunity for input into the action plan, and we are committed to working with the Province to implement the plan as well as the entire UN Declaration in British Columbia. It is critical that Indigenous Peoples have a say in, and can benefit from, the resources in their territories today and in the future. We are continuing our partnership with the provincial government to build tools to effectively share decision-making for natural resource development in Tahltan Territory.”

For more information on the Declaration Act and to download a copy of the action plan: https://declaration.gov.bc.ca/

For information on alignment of laws to the UN Declaration: https://www2.gov.bc.ca/gov/content/governments/indigenous-people/new-relationship/united-nations-declaration-on-the-rights-of-indigenous-peoples/alignment-of-laws