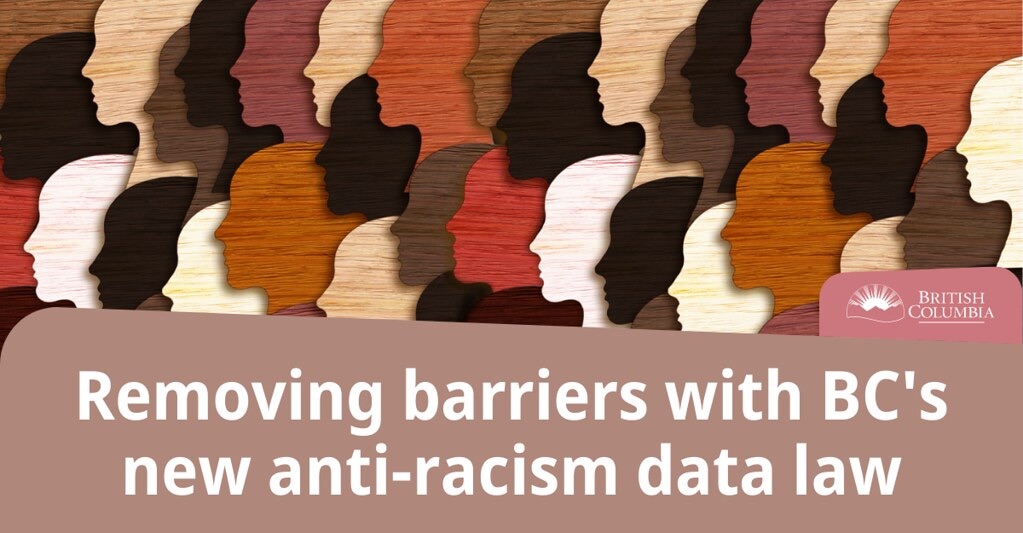 As a step to dismantle systemic racism and discrimination faced by Indigenous, Black and people of colour, the Province is introducing the anti-racism data act.

Data collected under the act will help identify gaps in programs and services, and allow government to better meet the needs of Indigenous, Black and racialized British Columbians. The act is the first of its kind in Canada to be co-developed with Indigenous Peoples.

“Our province is shaped by diversity with people from all over the world choosing to come to B.C. to build a better life. But for too long, systemic racism and the long-lasting effects of colonialism have unfairly held people back when it comes to education, job opportunities, housing and more,” said Premier John Horgan. “These injustices are compounded when Indigenous Peoples and racialized communities ask for action, only to be told by government to provide evidence using data that is not being collected. Today, we are taking an important step toward building a more equitable province by shining a light on barriers that exist so we can improve services and make life better for everyone.”

The anti-racism data act is based on the input of more than 13,000 British Columbians. More than 90% of racialized people who provided feedback through community-led engagement sessions believed that collecting intersectional demographic data such as ethnic origin, ancestry, faith, ability and gender identity could bring positive change in B.C. and be a step toward building trust between government and Indigenous Peoples and racialized communities.

“It is long overdue to finally move beyond institutionalized denialism and publicly commit to addressing anti-Indigenous racism in British Columbia, using the tools that are necessary such as data collection, information sharing and public reporting,” said Grand Chief Stewart Phillip, president of the Union of BC Indian Chiefs. “If accurate data is not collected, then First Nations people are often not believed when we describe the impact of racism and discrimination against First Nations. This new legislation will bring needed changes to support respectful and ethical approaches to data collection, data standards and consistency in reporting and addressing how First Nations access or receive necessary supports and services in British Columbia.”

Chief Lydia Hwitsum, political executive of the First Nations Summit, said: “For far too long, our people have been disproportionately affected by systemic racism, whether it be in the legal system, medical system, government institutions or other areas of society, and this injustice has been invisible due to the lack of disaggregated data. This legislation will enable enhanced collection, analysis and utilization of data in a way that honours our rights to data sovereignty. Nothing about us without us. We see this legislation as a beginning to addressing the larger systemic racism issues and problems that exist within our society.”

The legislation is one of the first pieces of new legislation to be co-developed with Indigenous leadership under the Declaration on the Rights of Indigenous Peoples Act, with the Province working in partnership with First Nations and Métis communities to ensure their voices are reflected in the act. The legislation will help advance Indigenous data sovereignty and self-governance, which are key commitments under the Declaration Act Action Plan, and establish a process for government to seek consent from Indigenous communities to use their data.

“This historic legislation will fundamentally change government programs and services in B.C. by removing long-standing barriers,” said Rachna Singh, Parliamentary Secretary for Anti-Racism Initiatives. “Our work doesn’t end today – we must face up to the discomfort of talking about racism and fully commit to the work needed to be anti-racist. We will continue to work with Indigenous Peoples and racialized communities at every stage as we take the next steps to implement this legislation based on mutual trust and respect as we build a better, more inclusive B.C. for everyone.”

The act will ensure that the proper safeguards and protections are put in place to protect this information and prevent it from being used for harm. It will also require government ministries to follow careful guidelines before any statistical data is shared publicly and to release statistics annually to support and advance racial equity.

“The anti-racism data act is an important step toward the development of strategies, methods and policies that will break down the systemic barriers that maintain or exacerbate avoidable and unfair inequalities in power, resources or opportunities across the many racial, ethnic and cultural groups in British Columbia,” said Regional Chief Terry Teegee, B.C. Assembly of First Nations. “The careful and thoughtful collection of information will be critical to keep this work focused and effective. I’m pleased that the many years of hard work to realize the implementation of the Declaration on the Rights of Indigenous Peoples Act is beginning to bear fruit with the co-development of this legislation. The anti-racism data act will benefit First Nations, and all British Columbians, as we strive toward more inclusive and equal communities.”

The anti-racism data legislation builds upon initial recommendations from the B.C. Human Rights Commissioner’s report, The Grandmother Perspective, which provides suggestions about how government can use disaggregated data to address systemic discrimination. It is also informed by recommendations from the In Plain Sight report from Mary Ellen Turpel-Lafond, which outlines steps for government to address anti-Indigenous racism in the health-care system.

The Province will continue to engage with Indigenous Peoples and racialized communities to support the implementation of the anti-racism data act and tackle systemic racism in B.C. This will include creating a new data advisory committee to collaborate with government on implementing the legislation.

To learn more about the engagement and read the five engagement reports, visit: https://engage.gov.bc.ca/antiracism

To read the In Plain Sight report, visit: https://engage.gov.bc.ca/app/uploads/sites/613/2020/11/In-Plain-Sight-Summary-Report.pdf