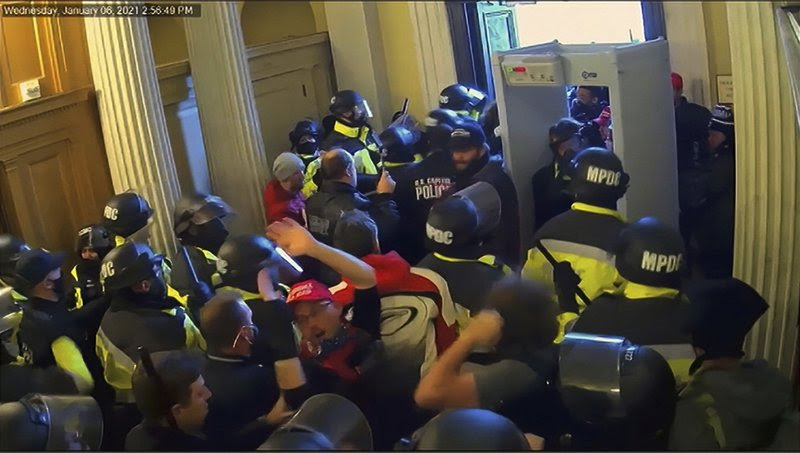 It was raw and visceral. And it un-mistakenly brought home just how much worse last month’s deadly insurrection at the U.S. Capitol could have been.

Lawmakers prosecuting the case in the Senate aim to prove that Trump bears singular responsibility for the siege.

The footage shown at trial, much of it never before seen, has included video of the mob smashing into the building, distraught members of Congress receiving comfort, rioters engaging in hand-to-hand combat with police and audio of Capitol police officers pleading for back-up.

It underscored how dangerously close the rioters came to the nation’s leaders, shifting the focus of the trial from an academic debate about the Constitution to a raw retelling of the Jan. 6 assault.

Today brings the second and final full day of House prosecution arguments, with the Trump legal team taking the lectern Friday and Saturday for up to 16 hours to lay out their defense.

The Scene: Senators in both parties were stoic and rapt as they relived the horror, watching almost 90 minutes of terror unfold on large screens near their desks. If any senators had tried not to look at images of the Jan. 6 siege on the Capitol, or to bury their memories after they fled a violent mob of Trump supporters that day, they were not able to do so any longer. Senators braced themselves in their chairs, leaned forward over their desks and stayed absolutely silent — impartial jurors but also witnesses to the violence, Mary Clare Jalonick writes.

Biden Keeps His Own Counsel: Did someone say impeachment? President Joe Biden has avoided wading into the debate. Biden has said he wouldn’t watch the trial and was leaving it up to the Senate to decide whether to convict Trump. White House press secretary Jen Psaki has dodged question after question about the trial. The message reflects the political and practical realities of the moment. White House aides privately note that the president doesn’t gain much from weighing in. And they say staying above the fray allows him to focus on his national COVID-19 plan, Jonathan Lemire and Alexandra Jaffe report.

Trump’s Lawyers: Trump has employed high-powered litigators for decades, but since losing the election to Biden, he’s been bleeding attorneys. More established firms have backed away from his baseless claims of election fraud, leaving him with legal teams that repeatedly made elementary errors in cases that were quickly rejected. His personal attorney, Rudy Giuliani, was ridiculed for his performance before a federal judge during one election case. By the time Trump’s second impeachment trial rolled around, he was looking far outside the top law firms that typically would represent an ex-president. Alanna Durkin Richer, Nomaan Merchant and Colleen Long report.

Georgia Election Investigation: A Georgia prosecutor’s office has opened a criminal investigation into “attempts to influence” the outcome of last year’s general election. Officials did not mention Donald Trump by name, but a spokesman said that is part of it. Trump has come under intense criticism for a call he made to the state’s top elections official last month. Trump pressed Secretary of State Brad Raffensperger to “find” enough votes to overturn Joe Biden’s victory in the state, Kate Brumback reports.