Elected officials are essentially employees to the public. We as the public demanding that know exactly how elected official do business from taxes to how they operate their own business. We should be privy to all agendas that our public official have going on.

Let us talk about what is happening in Surrey British Columbia the Mayor of the city is trying to force a new police force. The question is do the citizens of Surrey really want the change. Consider the population of this city is about 500,000 people and out of this population a petition was circulated to stop the change of police force and to keep the current RCMP active in Surrey. The Petition was ignored by the city and the Mayor after gathering 45,000 signatures of close to 10% of the population. Why was this petition ignored? What is the real agenda behind this change in police force? When looking around the city you find signs popping up on lawn asking for the city to keep the RCMP as the main police force in this city. 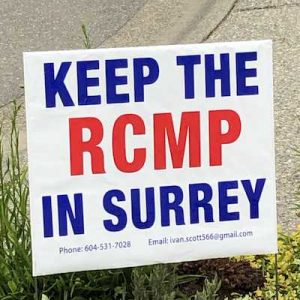 The message seems to be clear that there is a large group in Surrey BC that do not want a Surrey Police force. Why are these people being ignored? The total voting public was just over 110 Thousand people which does change our view of how many people do not want the change in police force. Further, let’s consider that Mayor Doug McCallum won his seat with a small total of 45,000 votes. Can Mr. McCallum afford to ignore this petition when he won by such a narrow margin?

Doug McCallum has publicly questionable life he and his live-in partner are involved in a business in South Surrey BC, Mountainview Wellness. Wellness centres are very needed as well as Naturopathic Doctors. There is a question about a conflict of interest over his personal involvement with Allison Patton who was a partner in Mountainview Wellness. There is even a report of a Zoom bomb during a webinar hosted by Mountainview where McCallum was spotted in the background.

Listen to this conversation with a concerned citizen in Surrey.

Thank You MeetFox.Com for providing with communications tools to record our interviews