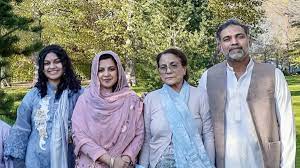 According to the London ON Police Service

Monday that the driver of a black pickup truck heading south on Hyde Park Road near South Carriage Road intentionally mounted the sidewalk and struck the family members.

“We believe the victims were targeted because of their Islamic faith,” Chief Steve Williams said during a news conference.

Prime Minister Justin Trudeau has called this attack “Terrorism.” This is calling the act exactly what it is but naming the act is not enough. We need to do more to stop these acts from happening. Other Party Leaders make statements calling the act appalling but our society needs to bottom line this we need to be able to walk around and enjoy life while feeling safe.

“This is our Canada:” Jagmeet Singh speaks out after Muslim family killed, injured in London, Ont. attack NDP Leader Jagmeet Singh said on Tuesday that while some people say the London, Ont. vehicle attack that left four members of a Muslim family dead and one child injured was “not our Canada,” it “is our Canada” and that the country was a place “of racism, of violence, of genocide of Indigenous people and our country is a place where Muslims aren’t safe.” He went further to say in speaking with Muslim community members, he said they were asking “how many more families will be killed before we do something.”