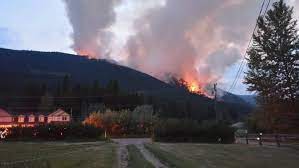 We have fires raging, up and down the North American Pacific Coast, running from the Baja Peninsula, up to Alaska, health conditions due to smoke in our neck of the woods of British Columbia are going up. Clean Air is becoming a hard thing to find as the fires rage evacuation notices passed out by the BC Wildfire Officials.  Fire officials 1000s of people have been displaced and put into shelters, as their homes are threatened. One town at the very beginning of the fire season was levelled by a firestorm that took only a matter of minutes to wipe out Lytton BC. Fires are raging, some because people figured the rules don’t apply to them. Other fires are naturally caused by lightning strikes. Those lightning strikes are due to climate change. Our planet is warming up, and how we know our planet is warming. We can measure the warming by lightning. The more lightning that happens in the warmer the planet is the lightning is actually scientifically measured by a certain radio frequency, the louder the frequency becomes the warmer the planet is becoming. With this, we need our elected officials to step up to the plate and come up with real policies regardless of the amount of money they can pump into the economy, regardless of the number of paid jobs it may create, They need to come up with a real policy that is going to eliminate the carbon emissions into our atmosphere. We know that carbon emissions into the planet can cause the warming of the planet, Which is called a greenhouse effect. If you have any doubts about the science behind the greenhouse effect. I invite you to go look up the atmosphere, conditions of the planet Venus, where there are large numbers of hydrocarbons in their atmosphere. There’s a large amount of carbon dioxide in the atmosphere, causing immense heat and pressure within the atmosphere. So we need our elected officials to come up with real policies to help curb carbon emissions. When the Canadian government, the federal government came up with a plan that would cut over a number of years with cut carbon emissions by 45%. We should have stood up and screamed. not good enough, go back and try again. We don’t need to come to net zero, We need to come as close to possible as zero. raising the taxes on fossil fuels that we pump into our cars is not going to do it.

The corporate mining processes. They strip away the trees. Those trees are needed to gobble up that carbon that is pushed into the air. These trees. Take in the carbon dioxide. They use it to pump oxygen back out. While putting the carbon that is leftover into the ground. That’s an important feature of trees that they actually take in the carbon, and they pump it back down through their roots into the ground. The more trees, possibly, the lower the temperature of our planet. Elected need to consider the effect of deforesting areas for real estate and industrial development. We need to protect our old-growth trees and the forest that surrounds us. These are protecting us from future temperature raises. The carbon that is being pumped into the atmosphere will be gathered at put back to the earth by nature if we are careful with our forest and allow the trees to thrive.

During this fire season of 2021, while all the evacuation notices and evacuation warnings are given, people are being displaced. Hundreds of fires are burning they’re burning 1000s and 1000s of Hector’s of the forest. Some of our elected officials who helped develop the policy that would evacuate people from areas are travelling with their families across fire zones to go camping themselves to go visit communities in the interior BC. That might eventually be affected by Wildfire, elected officials, not following their own warnings. The warnings that were issued by policies that were created on municipal and provincial levels to stop others from travelling into these areas have been travelling their themselves, breaking their own rules. We need our elected officials, not only to come up with policies to help us live better. But we need those same elected officials to find themselves, obeying those rules at the same time. Election times are coming around. And we need to elect officials who want to serve us who want to abide by the rules that were put in place. If you have a summer home in a beautiful and forested area, you want to go visit it, you want to enjoy nature in all of its splendour. We want to enjoy those cottages and those properties that. Simply put, we get to listen to the trees blow the birds sing the books, the Brooks babble. Most of us do. Most of us who, especially those who live in urban centres, love to get out to where it is quieter, and where nature surrounds us, where we can go hug a tree if we want. We shouldn’t do this at the cost and the expense of those trying to protect our forests from fire. So I invite everyone to go on social media, find these elected officials who take it upon themselves to cross fire lines, and to put themselves in places where fire officials are warning us to stay away from because they need to be protected from climate change, and ultimately wildfire that we find ourselves at the polls for election time. Remember these people. And we cast our votes accordingly.