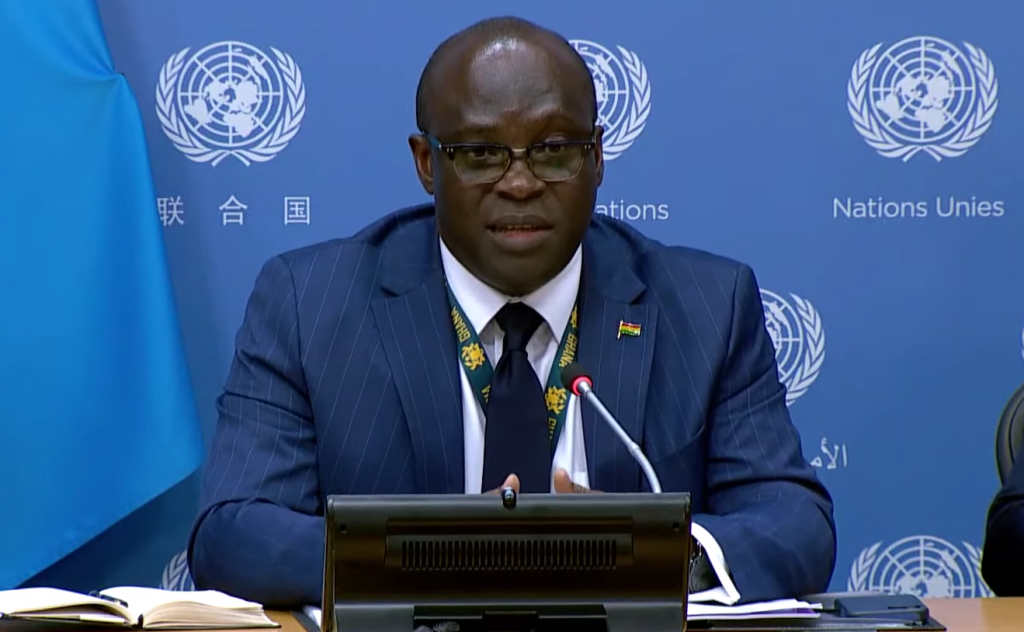 The Security Council’s programme of work for November will feature two signature events, which will build on the “clear African focus” towards addressing threats against peace and security of the just-concluded Gabonese presidency, its President for the month told a United Nations Headquarters press conference today.

Harold Adlai Agyeman (Ghana), holding the Council’s rotating presidency for November, observed that the programme was designed so as to enable the organ to carry out its work while accommodating other competing international events, such as the twenty-seventh Conference of the Parties to the United Nations Framework Convention on Climate Change in Sharm el-Sheikh and the Group of 20 Summit in Bali.

The first of the two signature events for the month will be an open debate taking place on 3 November, addressing the theme of “Integrating effective resilience-building in peace operations for sustainable peace”, and will be chaired by Shirley Ayorkor Botchwey, Ghana’s Minister for Foreign Affairs, he said, adding that it will seek to foster “a focused conversation on balancing kinetic and non-kinetic components of peace operations, particularly in the continent of Africa”.

On 10 November, a second signature event — on counter-terrorism in Africa — will be held, chaired by the President of Ghana, Nana Addo Dankwa Akufo-Addo, he continued, stating that the debate will explore how such efforts can be best supported by the Council, including through the provisioning of adequate, predictable and sustainable funding.

Turning to other scheduled activities, including one of “special interest” not mentioned in the programme of work, he said that, on 4 November, the Council will hold a breakfast meeting with the Elders, noting that the last such meeting took place in September 2021.  Discussions will focus on the Council’s functioning in the midst of the present geopolitical context, he said, noting that thus far, four members of the group have confirmed attendance, including former United Nations Secretary-General Ban Ki-Moon and Zeid Ra’ad al Hussein, President of the International Peace Institute.

On 2 November, the Council will hold its annual briefing with the United Nations High Commissioner for Refugees, Filippo Grandi, he said, adding that the meeting will highlight emerging global challenges and address the root causes of forced displacement.  On 4 November, elections will be held for a judge of the International Court of Justice to replace Antônio Augusto Cançado Trindade of Brazil who passed away earlier in 2022.

Further, on 14 November, the Council will hear from Police Commissioners on improving peacekeeping operations in line with Council resolution 2436 (2018), followed by a briefing, on 16 November, of the Secretary-General’s 180-day report on the activities of the Group of Five for the Sahel (G5 Sahel) joint force, he said.

In addition, on 22 November, a briefing will be held on the perils in the Gulf of Guinea, during which a report will be presented, in line with Council resolution 2634 (2022), on the linkage between armed robbery on the sea and terrorism in the Sahel.

On 17 and 18 November, he continued, the Council will undertake its annual workshop for incoming members of the United Nations Security Council, Ecuador, Japan, Malta, Mozambique and Switzerland, titled “Hitting the Ground Running”, convened by the Government of Finland.

During the month, the Council will also take up a number of scheduled mandate renewals, he went on, including one on Bosnia and Herzegovina, and others concerning Somalia, United Nations Multidimensional Integrated Stabilization Mission in the Central African Republic (MINUSCA), United Nations Interim Security Force for Abyei (UNISFA) and the Security Council Committee established pursuant to resolution 1540 (2004).

Mr. Agyeman then responded to questions posed by media correspondents, a smattering of which raised the delay on Council action in response to the situation in Haiti, in particular, the prospect of a second resolution responding to the request of the Prime Minister of Haiti for the intervention of an international force to address the law and order situation.  To these, he replied that there have been no meetings scheduled to address the situation; however, he was aware of ongoing consultations with key stakeholders and countries in the region to establish the nature of the force.  When pressed further on the urgent need to tackle the crisis, he said while he is concerned about the situation, it is a “complex matter”, as some Haitians have reservations to foreign interventions.  There was therefore a need to work towards addressing the situation while taking all Haitians along.

Addressing questions on the Russian Federation’s suspension of its participation in the Black Sea Grain Initiative, he said the balance of views among Council members demonstrate general support for the Initiative’s continuation.  The Council will therefore encourage efforts towards this end, led by the Government of Türkiye and the Secretary-General, he said, expressing hope that the Russian Federation will “come back to the table” on the issue.

Asked about peace talks over the conflict in Ethiopia’s Tigray region, which are being held in South Africa with African Union mediation support, he renewed his country’s call for an immediate cessation of hostilities, and for safe access to be provided to humanitarian agencies.  The talks should be held to lay the ground to launch a more sustainable peace process, he said, adding:  “Peace processes are not linear in nature; they progress and regress.”  However, the Union is committed to supporting such efforts.

Queried about reported plans by Democratic People’s Republic of Korea to conduct a nuclear test before the midterm elections, he expressed concern about the “unprecedented intensity and diversity” of its missile tests since the beginning of 2022.  However, he stated that the Council can only be effective when all its members support the actions it determines to take.

Responding to a question about the “dangerous precedent” posed by the holding this week of an informal meeting on Iran convened by the United States, he said Iran as a country is not in the Council’s file, except in matters concerning the Joint Comprehensive Plan of Action, and pointed out that the meeting in question is an Arria-formula meeting, which are “not technically Security Council meetings”.  However, he went on to state that reports of 250 deaths that had occurred are concerning and expressed hope that the Iranian authorities will be able to find space to resolve matters with protesters.

For the full programme of work, please see:  www.un.org/securitycouncil/events/calendar.