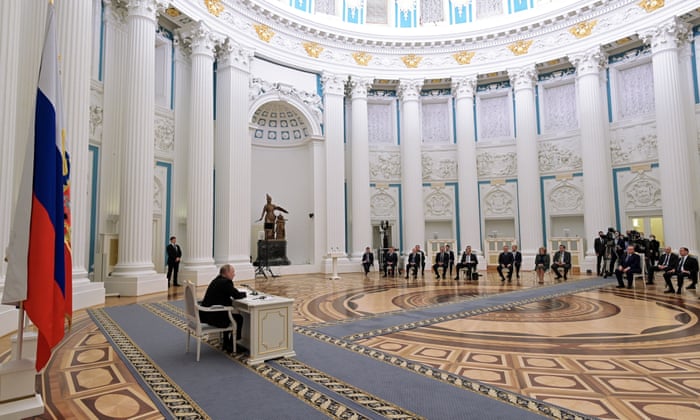 As tension continues to mount between Russia and Ukraine Vladimir Putin make a one-hour speech about why he recognises the separatist as sovereign. He claims the current government is the result of a coupe and those fighting against those who came to power because of the coupe are not rightfully there. The speech discusses a long history of hostility led by NATO against Russia. At one point he wanted to be friendly with the Western countries of NATO and was met with hostility. Claiming that NATO only wants to see Russia as the enemy.

On Monday night Ukrainian officials said Russian troops may have already entered separatist territory. The officials said local people in the town of Makiivka, 15kms west of rebel-held Donetsk, saw what appeared to be Russian armoured vehicles on the move.

One source – who declined to be named – said “a huge convoy of Russian armoured personnel carriers and other equipment has been travelling for one and a half hours”. It was spotted heading north towards the city of Yasynuvata, also in the Donestk region.

Video released by Ukraine appeared to show a column of military vehicles moving in convoy along a road. The officials said it was not possible to tell if the troops belonged to the regular Russian army, or were from Russian-controlled separatist units.

Is the movement of troops into Donetsk really an invasion into Ukraine that Putin is trying to disguise. We have been watching the tension and the build-up and withdrawal of troops. We also have militarized drills happen along the border of Russia and Ukraine. Belarus has been complainant with Russia and the movement of arms and personnel that could lead to war.

U.S. President Joe Biden said Friday that he is “convinced” Russian President Vladimir Putin has decided to invade Ukraine, including an assault on the capital, as tensions spiked along the country’s militarized line with attacks that the West said could be “false-flag” operations meant to establish a pretext for invasion.

A humanitarian convoy was hit by shelling, and pro-Russian rebels evacuated civilians from the conflict zone. A car bombing hit the eastern city of Donetsk, but no casualties were reported.

After weeks of saying the U.S. wasn’t sure if Putin had made the final decision to invade, Biden said that assessment had changed, citing American intelligence.

“As of this moment I’m convinced he’s made the decision,” Biden said. “We have reason to believe that.” He reiterated that the assault could occur in the “coming days.”

Meanwhile, the Kremlin announced massive nuclear drills to flex its military muscle, and Putin pledged to protect Russia’s national interests against what it sees as encroaching Western threats.