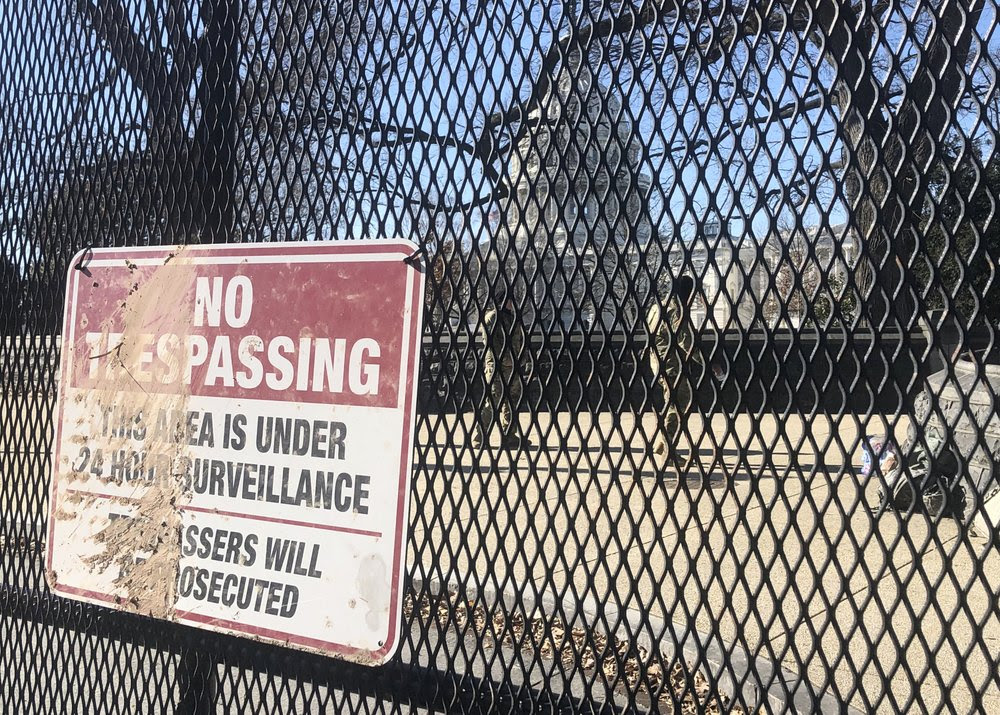 Poised to impeach President Donald Trump for an unprecedented second time, the U.S. House is speeding ahead to try to oust him from office.

Trump is to face a single charge — “incitement of insurrection” — over the deadly riot at the U.S. Capitol, Lisa Mascaro, Bill Barrow and Mary Clare Jalonick report.

Democrats are pushing first for the vice president and Cabinet to invoke their constitutional authority to remove Trump from office.

If that fails, impeachment proceedings are set for Wednesday. Pence met with Trump last night for the first time since the Capitol attack, and the vice president has shown no inclination to invoke the Constitution’s 25th Amendment to push Trump out.

President-elect Joe Biden said that those who “engaged in sedition” must be held accountable.

VIDEO: House looks to oust Trump after US Capitol riot.

Analysis: Trump’s days in office are literally numbered. But he’s already stopped doing much of his job. In the last three weeks, a bomb went off in a major city and the president said nothing about it. The coronavirus surged to horrifying new levels of illness and death in the U.S. without Trump acknowledging the awful milestones. A violent mob, incited by the president’s own words, chanted for Mike Pence’s lynching at the Capitol and Trump made no effort to reach out to his vice president. The transgressions, big and small — of norms, of leadership, of human decency — cast a pall, and, in the view of even close advisers speaking privately, have indelibly stained his legacy. Zeke Miller writes.

Trump will travel to Texas today to tout one of the pillars of his presidency: his campaign against illegal immigration. The trip is part of an effort by aides to try to salvage a Trump legacy, Jill Colvin reports.

Biden Inauguration: This time, law enforcement officers say, they’ll be ready. The inauguration of President-elect Joe Biden will be held in the same spot at the U.S. Capitol where a violent, pro-Trump mob descended last week. The U.S. Secret Service Special Agent in Charge is leading the inauguration security, and he says the two events aren’t comparable from a security standpoint. The theme for the event will be “America United,” an issue that’s long been a central focus for Biden but one that’s taken on added weight following the insurrection. Biden himself hasn’t expressed concern about his own personal security at the inauguration, Colleen Long and Alexandra Jaffe report.

Crisis Oratory: In moments of fraught national crisis, American presidents have sought to summon words to match the moment in the hope that the power of oratory can bring order to chaos and despair. Think Lincoln at Gettysburg, Franklin Roosevelt during the Depression and World War II, Ronald Reagan after the Challenger disaster, George W. Bush with a bullhorn at Ground Zero after 9/11 and Barack Obama after the slaughter of congregants at a South Carolina church. Democrats and Republicans alike managed to sound the right notes that brought at least a temporary sense of national unity. After a violent insurrection at the U.S. Capitol, a cathedral of democracy, Donald Trump did not meet that prescription, Michael Tackett writes. 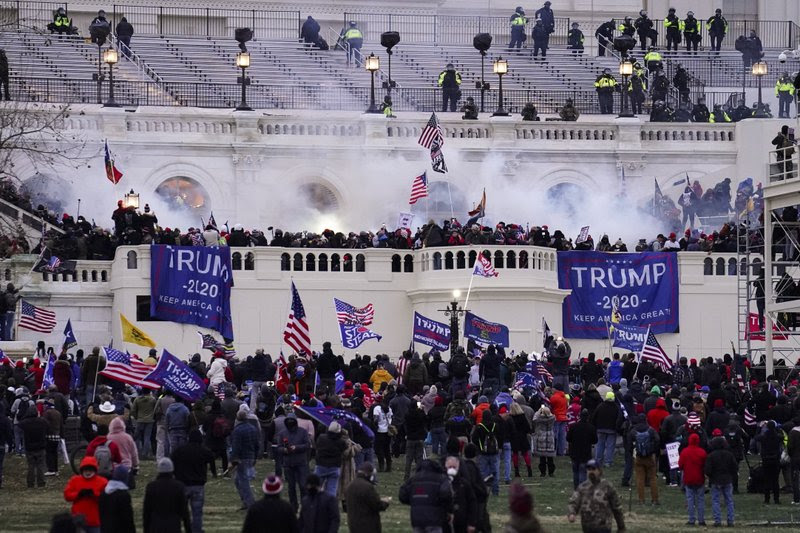 The FBI has warned of plans for armed protests at all 50 state capitals and in Washington, D.C., leading up to President-elect Joe Biden’s inauguration.

The stark warning comes just days after the bloodshed during last week’s deadly siege at the U.S. Capitol.

Two law enforcement officials read details of the memo to the AP. The officials were not authorized to speak publicly. The officials say investigators believe some of the people planning protests are members of extremist groups.

Statehouses: Capitols across the country are under heightened security after the siege of last week and the FBI warning. State capitols were reinforced with extra police officers and National Guard units as some legislatures returned to business. Fencing had already gone up in some cities during racial injustice protests last summer, and it is being added at others. In Michigan, where armed demonstrators against virus restrictions entered the capitol last year, a state commission voted to ban the open carrying of weapons in the Capitol building, David A. Lieb reports.

Explosives: As thousands of Trump supporters stormed the U.S. Capitol, last week federal agents were working to detonate two pipe bombs found just blocks away at the offices of the Republican and Democratic national committees. The focus on the insurrection shifted public attention away from the explosives threat, which experts say remains a primary concern for law enforcement ahead of next week’s inauguration.

Nation’s Capital Security: The mob attack strongly highlighted a longstanding local security paradox: The District of Columbia government lacks authority over much of the area within its borders. Now as the city braces for a nerve-wracking time ahead of Biden’s inauguration, its mayor is seeking increased security and better coordination among the multiple law enforcement agencies involved. In the long term, the security debacle has lent momentum and urgency to the longstanding effort for D.C. to gain direct authority over its National Guard — and the parallel campaign to make it the 51st state, Ashraf Khalil reports.

EXPLAINER: Why National Guard’s role was limited during riot. 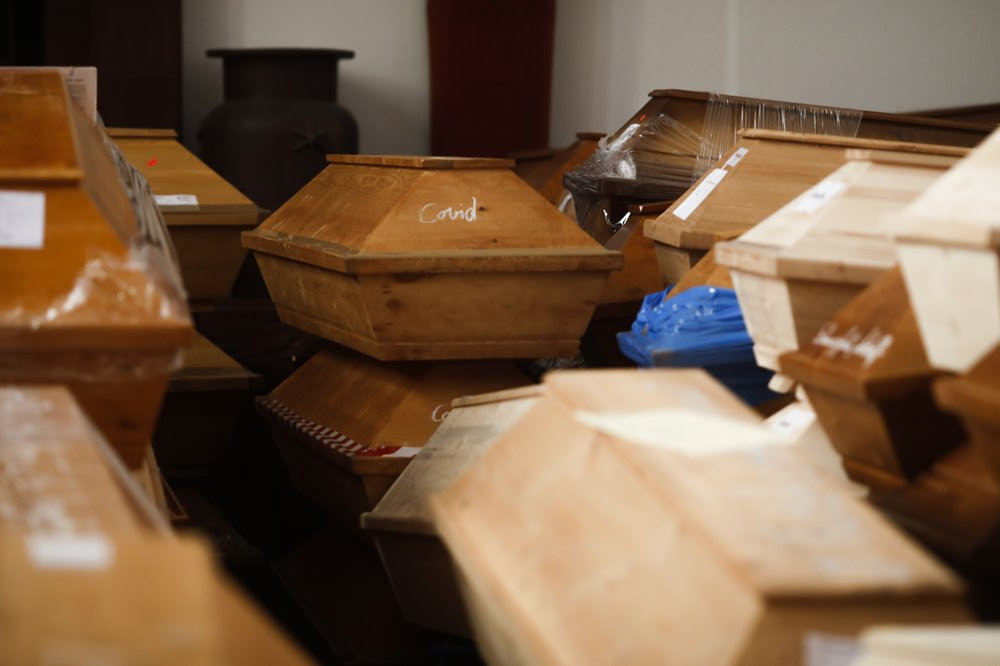 A surge of coronavirus deaths in the eastern German state of Saxony has filled Meissen crematorium, which would normally have 70 to 100 caskets at this time of year, when the flu season takes its toll. Now it has 300 bodies waiting to be cremated.

Each day dozens more are delivered to the building on a hill overlooking this ancient town, from where Frank Jordans reports.

Some have linked the high infection rate in Saxony, where Meissen is located, to wider anti-government sentiment in a state where over a quarter voted for the far-right in the last election.

Britain, in the meantime,  opened seven mass vaccination centers as it moved into the most perilous moment of the pandemic, with exhausted medical staff reeling under the pressure of packed hospitals and increasing admissions.

England’s chief medical officer warned that the coming weeks will be the worst of the pandemic for the National Health Service, describing it as ”the most dangerous time we’ve really had” as he appealed to the public to more closely follow prevention measures. He said the new variant of COVID-19, which spreads the virus more quickly, has aggravated an already difficult situation.

Peru Hospitals: The intensive care units at hospitals in Peru are at capacity as virus cases keep rising. These days, 20 patients are vying to get a bed in the ICU of a hospital in Lima, the capital. Peruvians are begging for ICU beds on social media as the daily rise in infections has reached 1,500. The shortage of beds is partly the result of an increase in cases fueled by holiday gatherings and political protests in November, Cesar Barreto and Martin Mejia report from Lima.

US Vaccine: Entering the second month of the biggest vaccination effort in history with a major expansion of the campaign, the U.S. is opening football stadiums, ballparks, fairgrounds and convention centers to inoculate a larger and more diverse pool of people. After a frustratingly slow rollout involving health care workers and nursing home residents, states are moving on to the next phase before the first one is complete. They are making shots available to senior citizens, teachers, bus drivers, police officers, firefighters and those with underlying medical conditions, Lisa Maria Pane reports.

Across the U.S., where the virus death toll has climbed to more than 376,000, politicians and health officials have complained that too many vaccine shots were sitting unused because of overly rigid adherence to the federal guidelines that put an estimated 24 million health care workers and nursing home residents at the front of the line.

Should I get a COVID-19 vaccine if I’ve been infected? The AP is answering Viral Questions in this series.

South Africa’s Surge: The nation is struggling to cope with a spike in cases driven by the spread of its more infectious variant during widespread holiday travel. As the numbers of new infections rise, South Africa’s hospitals are exceeding capacity. Of particular concern is Gauteng province, the country’s most populous, which includes the cities of  Pretoria and Johannesburg, from where Andrew Meldrum and Mogomotsi Magome report. Neighboring Zimbabwe is also experiencing a resurgence of infections, largely as a result of the high numbers of travelers between the two countries.

Herd Immunity: The World Health Organization’s chief scientist has warned that even as numerous countries start rolling out vaccination programs to stop COVID-19, herd immunity is highly unlikely this year. He said it was critical countries that maintain strict social distancing measures for the foreseeable future, Maria Cheng and Jamey Keaten report.

Greece’s Isolation in Death: COVID-19 victims endure harrowing isolation before and after death in Thessaloniki, the city in Greece most acutely affected by the virus. Under rules set by the city, people who were infected with the virus must be buried in segregated plots at two cemeteries. One woman couldn’t see her 84-year-old mother at either the nursing home where she first became ill or the hospital where she spent several weeks. She then had to identify her at the morgue from a distance, Costas Kantouris reports.

Iraq’s Women; Growing numbers of Iraqi women are finding some good under the movement restrictions imposed because of the pandemic: They’re starting their own businesses from home. Using online shopping, social media and delivery services, they can bypass some of the discrimination and harassment that often come with working in Iraq’s male-dominated, conservative society, Abdul Rahman Zeyad reports.