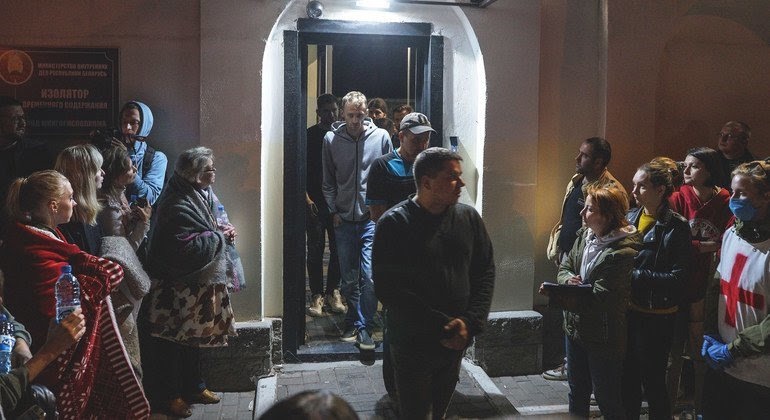 The need for information and communication is global with our ability to be able to travel and the need to save lives by moving food and medical supplies showing us the defined need for journalists to free to report on conditions. When the news is reported without agendas from governments and corporate money-making machines journalism can call real attention to the separation of the human condition. When stories are told to support human rights people respond with aid and open door to refugees. Journalism can help people find the understanding and gives people in reading viewing the to offer help through a true feeling of empathy. This is the job of a human right journalist and a group in Belerus.

The BAJ was formed in 1995 as a non-governmental association of media workers with the objective of promoting freedom of expression and indepenent journalism in Belarus.

Since the disputed presidential election in Belarus in August 2020, which drew millions onto the streets in protest during the ensuing months, basic human rights have been in the crosshairs.

In March this year, the UN human rights office produced a Human Rights Council-mandated report on the situation in the European nation, which said the Government’s continuing crackdown had violated the rights of hundreds of thousands.

“The examination not only lays bare the violations inflicted on people trying to exercise their fundamental human rights, but highlights the inability of victims to access justice”, said UN rights chief, Michelle Bachelet.

In August 2021, following a police raid on the office of the BAJ, the Supreme Court of Belarus ordered the dissolution of the organization, at the request of the country’s Ministry of Justice.

“By awarding the prize to the BAJ, we are standing by all journalists around the world who criticize, oppose and expose authoritarian politicians and regimes, by transmitting truthful information and promoting freedom of expression”, said Alfred Lela, Chair of the Prize‘s international jury, and founder and director of an Albanian media organization.

“Today we salute and praise them; we find a way to say: we are with you, and we value your courage”.

The head of UNESCO, Audrey Azoulay, noted that for 25 years, the UNESCO/Guillermo Cano Prize “has been calling the world’s attention to the bravery of journalists around the world who sacrifice so much in the pursuit of truth and accountability.

“Once again, we are inspired by their example and reminded of the importance of ensuring the right of journalists everywhere to report freely and safely”

The $25,000 Prize recognizes outstanding contributions to the defence or promotion of press freedom especially in the face of danger. It is named after Guillermo Cano Isaza, the Colombian journalist who was assassinated in front of the offices of his newspaper El Espectador in Bogotá, Colombia, on 17 December 1986.

The 2022 World Press Freedom Day Global Conference will take place from 2 to 5 May under the theme Journalism under Digital Siege.

The Conference will discuss the impact of the digital era on freedom of expression, the safety of journalists, access to information, and privacy.

What if you could achieve that holistic success – thriving business 👩🏻‍💻, a happy family, an energized body – without losing your sanity? JOIN CROWN YOURSELF AND KIM SPENCER