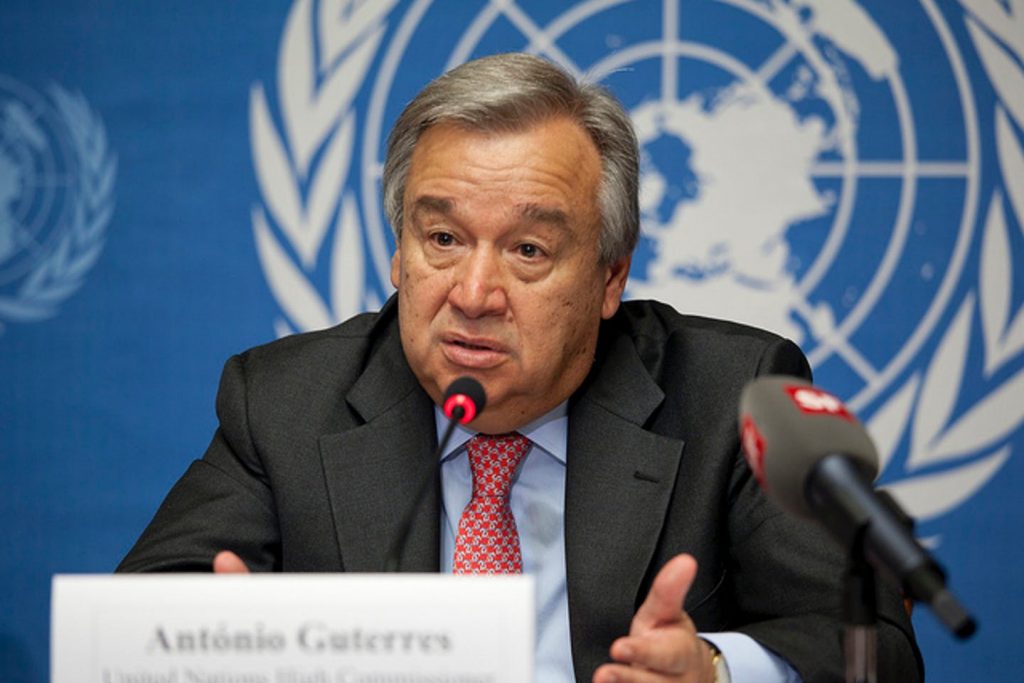 Ladies and gentlemen of the press,

As Secretary-General of the United Nations, I came to Moscow as messenger of peace.

My objective and my agenda is strictly linked to save lives and to reduce suffering.

I had a very frank discussion with the Foreign Minister, Sergey Lavrov, and it is clear that there are two different positions on what is happening in Ukraine.

According to the Russian Federation, what is taking place is a special military operation with the objectives that were announced.

According to the UN, in line with the resolutions passed by the General Assembly, Russia’s invasion of Ukraine is a violation of its territorial integrity and against the Charter of the United Nations.

The United Nations has repeatedly called for ceasefires to protect civilians and to facilitate a political dialogue to reach a solution.

So far, that has not been possible.

Today, across the Donbas, a violent battle is underway with tremendous death and destruction.

Many civilians are being killed, and hundreds of thousands of people are in life-threatening conditions, trapped by the conflict.

I am concerned about the repeated reports of violations of international humanitarian and human rights law and possible war crimes, and they require independent investigation for effective accountability.

We urgently need humanitarian corridors that are truly safe and effective and that are respected by all to evacuate civilians and deliver much-needed assistance.

To that end, I have proposed the establishment of a Humanitarian Contact Group, bringing together the Russian Federation, Ukraine and the United Nations, to look for opportunities for the opening of safe corridors, with local cessations of hostilities, and to guarantee that they are actually effective.

Simultaneously, we recognize that we face a crisis within a crisis in Mariupol.

Thousands of civilians are in dire need of life-saving humanitarian assistance, and many, of evacuation.

The United Nations is ready to fully mobilize its human and logistical resources to help save lives in Mariupol.

My proposal is for a coordinated work of the United Nations, the International Committee of the Red Cross, and the Ukrainian and Russian Federation forces to enable the safe evacuation of those civilians who want to leave, both inside the Azovstal plant and in the city, in any direction they chose, and to deliver the humanitarian aid required.

This is not just about what is happening in Ukraine, as we are seeing shock waves around the world.

The dramatic acceleration of the increases of the prices for food and energy, that was already taking place in the last year, are causing enormous suffering to hundreds of millions of the most vulnerable people worldwide. This comes on top of the shock of the continued COVID-19 pandemic and uneven access to resources for recovery, that particularly penalize developing countries around the world.

So the sooner peace is established, the better – for the sake of Ukraine, Russia, and for the world.

And it’s very important, even in this moment of difficulty, to keep alive the values of multilateralism.

We need a world that is multipolar, with multilateral institutions, and those multilateral institutions must abide by the UN Charter and by international law – and by the UN Charter and by international law, recognizing full equality among States, they hopefully will be an instrument that will allow us, once again, to come together as humankind and address the dramatic challenges we face, from climate change to epidemics and to many others, and in which the only war we should have would be a war of those that put the planet at risk.