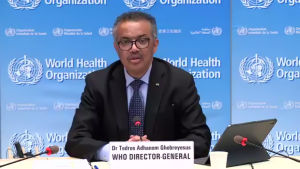 Yesterday, a new case of Ebola was reported near the city of Butembo, in the Democratic Republic of the Congo.

Butembo is in the North Kivu province, where a previous outbreak was declared over in June last year.

The woman, who sadly has died, was married to an Ebola survivor.

Thanks to the enormous capacity built during the latest outbreak, provincial health authorities have significant experience in responding to Ebola and in preventing onward transmission.

More than 70 contacts have been identified, and WHO is supporting local and national authorities to trace them and provide care where needed.

So far, no other cases have been identified, but it is possible there will be further cases because the woman had contact with many people after she became symptomatic.

Vaccines are being sent to the area and we hope that vaccination will start as soon as possible.

WHO has sent a rapid response team to provide support as needed.

The Oxford-AstraZeneca vaccine is one of several that has been shown to be effective in preventing severe disease, hospitalization and death from COVID-19.

The emergence of new variants of the virus has raised questions about the potential impact of those variants on vaccines.

Yesterday, South Africa announced it was putting a temporary hold on the rollout of the Oxford-AstraZeneca vaccine after a study showed it was minimally effective at preventing mild to moderate disease caused by a variant first identified in South Africa.

This is clearly concerning news. However, there are some important caveats.

Given the limited sample size of the trial and the younger, healthier profile of the participants, it is important to determine whether or not the vaccine remains effective in preventing more severe illness.

These results are a reminder that we need to do everything we can to reduce circulation of the virus with proven public health measures.

Several countries are succeeding in suppressing transmission, including those where new variants are circulating.

We all have a role to play in protecting vaccines. Every time you decide to stay at home, to avoid crowds, to wear a mask or to clean your hands, you are denying the virus the opportunity to spread, and the opportunity to change in ways that could make vaccines less effective.

It also seems increasingly clear that manufacturers will have to adjust to the evolution of the virus, taking into account the latest variants for future shots, including boosters.

We know viruses mutate and we know we have to be ready to adapt vaccines so they remain effective.

This is what happens with flu vaccines, which are updated twice a year to match the dominant strains.

WHO has an existing mechanism for tracking and evaluating variants of the virus that causes COVID-19.

It’s vital that countries continue to report these variants to WHO, so we can coordinate global efforts to monitor their impact and advise countries accordingly.

We’re now expanding that mechanism to provide guidance to manufacturers and countries on changes that may be needed for vaccines.

These developments highlight why it’s so important to scale up manufacturing and roll out of vaccines as quickly as possible and as widely as possible to protect people before they are exposed to new variants.

We also need to continue designing and conducting new trials, and we need to keep a close eye on the impact vaccines are having on epidemiology, severe disease and death so we can use vaccines to maximum effect.

WHO’s Strategic Advisory Group of Experts on Immunization, or SAGE, has met today to review the Oxford-AstraZeneca vaccine and to discuss these new developments. Tomorrow I will meet with the chair of SAGE to discuss its recommendations.

To say more about the new study in South Africa and its implications, I’m pleased to welcome Professor Salim Abdool Karim, the co-chair of South Africa’s Ministerial Advisory Committee on COVID-19.

Professor Abdool Karim, thank you for joining us today. You have the floor.

In the next few days, WHO expects to make a decision on the emergency use listing of the Oxford-AstraZeneca vaccine, for the two sites in India and the Republic of Korea which will produce it for COVAX.

We are committed to using all available data to make those assessments.

In the meantime, COVAX continues to prepare for its first quarter distribution, and to add to its vaccine portfolio.