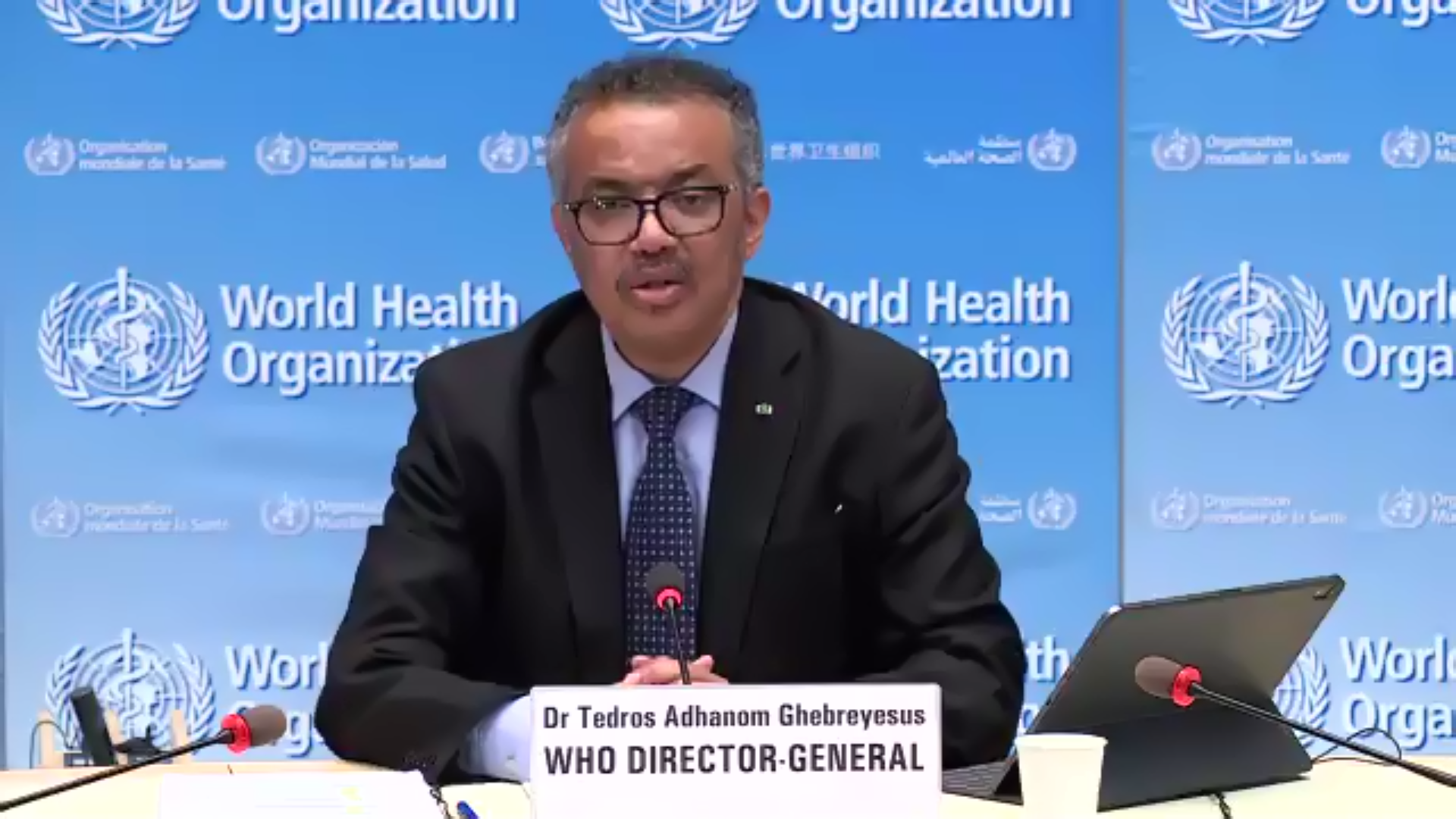 Over the past week, I have met with leaders at both the Commonwealth Heads of Government Meeting in Rwanda and the G7 in Germany to discuss the interconnected crises that need coordinated action.

Today I will cover health and humanitarian challenges that the world is facing.

Only with concerted action by governments, international agencies and the private sector can we solve the converging challenges.

On COVID-19, driven by BA.4 and BA.5 in many places, cases are on the rise in 110 countries, causing overall global cases to increase by 20% and deaths have risen in three of the six WHO regions even as the global figure remains relatively stable.

Our ability to track the virus is under threat as reporting and genomic sequences are declining meaning it is becoming harder to track Omicron and analyse future emerging variants.

We’re close to the mid-point of the year, which is the point at which WHO had called on all countries to vaccinate at least 70% of their population.

In the past 18 months, more than 12 billion vaccines have been distributed around the world.

75 percent of the world’s health workers and over-60s are now vaccinated.

The Lancet estimates that 20 million lives have been saved because of vaccines.

On the flip side, hundreds of millions of people, including tens of millions of health workers and older people in lower-income countries remain unvaccinated, which means they are more vulnerable to future waves of the virus.

While the hoarding of vaccines by rich and manufacturing countries was the major barrier to access last year, increasingly political commitment to getting vaccines out to people – and challenges of disinformation – have been hurdles at the national level in 2022.

With only 58 countries hitting the 70 percent target, some have said it’s not possible for low-income countries to make it.

I was just in Rwanda where second dose vaccination rates are now above 65% and still rising. And others like Nepal and Cambodia have shown it’s possible.

Yet the average rate in low-income countries is 13 percent.

But if there is enough political will domestically, support to ensure rollouts to communities and disinformation tackled, high vaccination rates are entirely achievable.

When vaccine rollouts began, WHO called for all countries to start with a layered approach targeting older people and health workers who were most at risk from the virus before moving to cover the rest of the population.

Going forward, to prevent deaths and severe disease, it’s important to keep the most at-risk groups up to date with vaccination.

In all countries, 100 percent of at-risk groups should be vaccinated and boosted as soon as possible.

For the general population, it also makes sense to keep strengthening that wall of immunity, which helps lessen the severity of the disease and lowers the risk of long- or post-COVID condition.

Even relatively ‘mild’ cases are disruptive and damaging, keeping children out of school and adults from work, which causes further economic and supply chain disruption.

Do I think countries should continue to vaccinate 70 percent of the population, starting with the most vulnerable?

Yes, I do. If we don’t share the fruits of science equitably, then we undercut the philosophy that all lives have equal worth.

If rich countries are vaccinating children from as young as six months old and planning to do further rounds of vaccination, it is incomprehensible to suggest that lower-income countries should not vaccinate and boost their most at risk and then work to strengthen their own walls of immunity.

On the research and development front, it is critical that there’s funding for second-generation vaccines as well as tests and treatments.

While honing vaccines to the evolving virus variants makes sense, I am concerned that the pace of mutation means the world is continuing to play catch up.

Building on existing vaccines that limit severity and prevent death, developing second generation vaccines that stop – or at least lower infection – would be a major step forward.

And the ideal solution would be the development of a pan-coronavirus vaccine that covers all the variants so far and potentially future ones.

This is feasible, WHO continues to convene scientists and researchers and there has been a lot of research into this virus and understanding immunology overall.

With WHO’s Solidarity Trials we can also offer global trials of vaccines to establish the safety and efficacy of quickly and effectively.

So going forward, the world should target 100 percent vaccination of older people and health workers, as well as strengthening the wall of immunity against COVID-19 towards and beyond 70 percent.

As I said at the turn of the year, tests and new treatments like anti- virals should also be available in every country.

Now is the time for Ministries of Health to integrate tests and anti-virals into clinical care so that people that are sick can be treated quickly.

I also call for accelerated efforts and incentives to be developed around the moonshot of developing a pan-coronavirus vaccine.

On Monkeypox, while the Emergency Committee did not advise that the current outbreak represents a Public Health Emergency of International Concern, they acknowledged the emergency nature of the event and that controlling the further spread requires intense response efforts.

They advised that I should reconvene them quickly based on the evolving situation, which I will do.

Nigeria, which has been battling an outbreak since 2017, has reported more cases this year, which could mean it matches or exceeds previous peaks.

Furthermore, the virus has now been identified in more than 50 new countries and that trend is likely to continue.

I am concerned about sustained transmission because it would suggest that the virus is establishing itself and it could move into high-risk groups including children, the immunocompromised and pregnant women.

We are starting to see this with several children already infected.

Right now this is the action WHO would like to see:

One, countries should increase surveillance by boosting testing as quickly as possible.

Two, countries should take a best practice approach to managing the response. WHO has already published clinical guidance to assist public health agencies and health workers on the frontlines of this outbreak.

Three, actively engage communities. With large gatherings happening around the world there are opportunities to both squash the stigma around the virus and spread good information so people can protect themselves.

WHO is actively working with LGBTQI+ communities to do just that and we encourage groups to get in touch with us if we can support.

Four, ensure that we provide equitable access to counter measures like vaccines and anti virals and also ensure the systematic collection of clinical data and efficacy to inform future recommendations.

WHO has been convening scientists via the R&D blueprint for epidemics to speed up research and development into tests, treatments and vaccines for monkeypox and develop a protocol for therapeutic development and rollout.

The food crisis: Across the globe, spiking prices of not only food but fuel and other commodities are leading to millions of people missing meals and going hungry.

This is having major physical and mental health repercussions.

People need access to affordable and nutritious food, as well as support through these difficult times.

Some regions like the Horn of Africa are facing extremely serious food insecurity issues that could lead to famine.

Over 80 million people, one in four, in the Eastern Africa region are food insecure and resorting to desperate measures in order to feed themselves and their families.

Lack of food and nutrition weakens people’s immune system and puts them more at risk of disease.

Children that are undernourished are at higher risk of death from pneumonia, diarrheal disease and measles.

As I said at the G7, WHO is working with partners on the ground to respond to this health and nutrition crisis.

This includes getting essential health services to those in need, treating sick children with severe malnutrition, and preventing, detecting and responding to infectious disease outbreaks.

WHO is setting up a hub in Nairobi, from where it will coordinate the response and organize the delivery of live-saving medical supplies to where they are needed most.

These supplies include medicines, vaccines, as well the products and equipment to treat children who are severely malnourished.

WHO is working with Ministries of Health in Djibouti, Ethiopia, Kenya, Somalia, South Sudan, Sudan and Uganda to set up robust disease surveillance system to be able to quickly detect and respond to disease outbreaks.

Finally, in light of the decision by the US Supreme Court overturning the ‘Roe v Wade’, I want to reaffirm WHO’s position.

All women should have the right to choose when it comes to their bodies and health. Full stop.

It saves lives. Restricting it drives women and girls towards unsafe abortions; resulting in complications, even death.

The evidence is irrefutable.

Limiting access to safe abortion costs lives and has a major impact particularly on women from the poorest and most marginalized communities.

Over the last 40 years, the global trend is toward women having greater access to safe abortion and while last week was a set-back, it is more important than ever to come together to protect women’s right to safe abortion – everywhere.